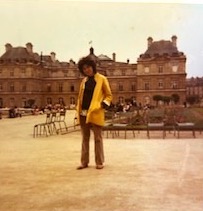 That’s dans ma voiture by the way. A while back, I wrote how I am listening to audiobooks on my commute to work. Now, I am using that time to relearn French.

Why French? Well, I took it for seven years when I was a kid starting in seventh grade. I recall reading some heavy-duty French lit in high school, but I didn’t get to be truly fluent until I went to Paris when I was a college student. I will cut to the chase, but my curiosity about the Seine got me into a sticky situation with a man I met, and I was suddenly fluent enough to rescue myself. Then, I used that skill to get me through Europe for a couple of months.

But after that, I didn’t have an opportunity to use French, and so it sunk into my subconscious.

Ella, my 7-year-old granddaughter, is in her second year in a French immersion program at her elementary school. When she spoke with me in French, I realize how rusty I was. (Her mother, my daughter, Emily, is taking a French course as well.)

Wouldn’t it be fun to converse in French with my smart granddaughter? Mais, oui.

So, I found a course on Audible. “Learn French for Beginners” with Paul Noble , who takes those listening through the paces for 12 hours and 38 minutes. A native-speaking French expert assists with pronunciation.

(I am excited that he has advanced courses in French on Audible, plus basics in many other languages.)

Right now, we are on the so-called language ground rules. We build sentences, and many seem appropriate if I was a traveler in a French-speaking country. It certainly wasn’t that way when I originally learned the language.

So how is going? Frankly, I surprise myself how much I recall, that the French language is indeed inside me. The words and phrases roll off the tongue. If I run into a complicated lesson, I back track and go over it again. Paul Noble says that’s fine. He is a reassuring teacher, urging his students not to worry. He says it will all make sense when we reach the end.

But my first test will be coming soon when I visit Ella later this month. Or rather …. Je vais visiter Ella.

ABOUT THE PHOTO ABOVE: A snapshot of me in Paris a long time ago. Sorry, it’s very small photo.

THANKS: I am thankful for the readers who have bought my books and even given reviews. Here’s a link to my books in case you are curious: Joan Livingston books on Amazon.

One thought on “Parlez-vous français?  Oui, in my car”