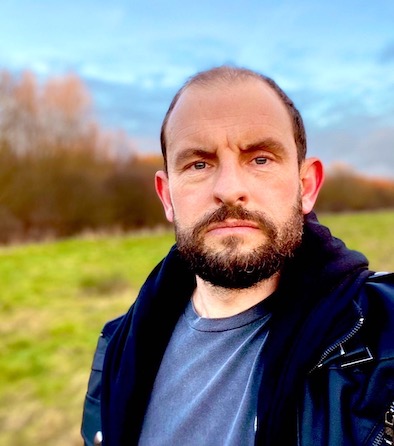 The next author in this 6Ws series is Gary Kruse from the UK. I so enjoy getting to know my fellow authors and what they are willing to share about their writing. How’s this? Gary wrote the majority of Badlands on his phone during his lengthy work commute. Up next? Bleak Waters, a supernatural mystery. But I will let Gary take over this post.

Who is author Gary Kruse?

I’m a writer of novels, short stories and flash fiction from Hornchurch in Essex. I’m married with two sons, and in my day job, I work in the educational/charity section as an Administration Manager. I like rock and alternative music and play guitar, enjoy football and tennis and love reading, cinema and theatre.

My latest published book is my dark thriller Badlands, a story of deception, betrayal and conspiracy inspired by and set on the wild rugged coastline of North Cornwall.

Perfect for fans of Lisa Jewell, Jane Harper, James Herbert and Robert Goddard, it’s the story of Willow, a runaway who’s dragged back into the life she fled when she gets a call for help from her estranged sister.

When she returns to the Cornish coastal village of St. Agnes where she grew up, Willow finds that her sister was involved in a local scandal, but has since gone missing.

To dig into the secrets of her sister’s life, Willow must confront her own mistakes and with every revelation Willow finds herself dragged deeper and deeper into a murderous conspiracy who’s roots lie a lot closer to home than she realises.

It’s a story of sisterhood, broken families, smuggling and hidden identities with a hint of social commentary and even a dash of the paranormal.

My current WIP is called Bleak Waters. It’s a supernatural mystery set in Hickling on the Norfolk Broads.

Twenty-five-years after a young woman went missing in broad daylight, a stranger turns up asking questions about the disappearance.

Lost in her own grief, the stranger’s arrival is a welcome distraction for twenty-three-year old local girl, Lily West, but when she starts uncovering the web of secrets and lies surrounding the disappearance, Lily realises that she’ll have to choose between protecting the people she loves, and uncovering the truth.

I began writing in 1996. I went to see the Craft in the cinema, and I’d recently seen the Lost Boys, and in the days that followed I started thinking what would happen if the girls from the Craft met the Lost Boys? From there, I began writing a series of short tales about the conflict between a gang of witches and a vampire crew, and this eventually became my first (and gratefully unpublished) novel, Blessed Be.

These days it’s mainly on laptop, but I wrote the majority of Badlands on my phone on my commute to and from work. I used to commute from my home in Hornchurch, to my job in Hampstead, North London, which was an hour and forty minutes each way, which meant I had around 3 hours a day of solid writing time.

We did a loft conversion a couple of years back, and now I have a writing space in the corner of the loft. But at the minute most of my writing is done in the local library on my lunch break from the day job. Occasionally I’ll write in coffee shops too.

To tell the stories that I want to read about the places I love, but that I can’t find in bookshops.

Thank you, Joan for hosting me! Readers can find links to all my social media, my mailing list, website and published works through this link: www.linktr.ee/garykruseauthor

Badlands is available from Amazon on kindle, kindle unlimited and in paperback: http://mybook.to/badlandsdarkstroke