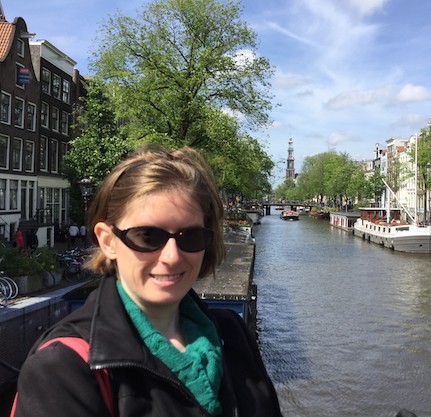 Jennifer Worrell, a Chicago-based author, is the next one featured in this 6Ws series. I found it interesting she wrote her suspense/crime novel, Edge of Sundown, sitting on a lawn chair while balancing an iPad on a retaining wall. Jennifer has a whole lot more to say about her writing, so I will let her take over.

Who is author Jennifer Worrell?

I’m a pen and cheese enthusiast from the States (Chicago) with an unofficial goal of writing in every genre before I die. I’m forever trying to catch up with my TBR list, but since I work at a university library, I have zero chance for success.  I live with a husband and a kitty, neither of whom understand the zeal for pens, but they do understand the cheese thing, so we get along quite well.

Edge of Sundown is a suspense/crime novel published by Darkstroke Books.  It tells the tale of Val Haverford, an aging author whose dystopian universe of covert invaders eliminate “undesirable” members of society—something that could never happen in modern-day Chicago—until it does.  What started as a chance to revive his career and reconcile dark events from his past becomes a race to save himself and the people he loves.

Though we never seem to learn much from history, and it always comes back to bite us, I had no intention of writing anything political when I started writing Sundown in 2014.  It came about purely from asking ‘what-if’ questions.  That’s what I get for taking more than six years to write a book.

Many stories are about loss, but lost opportunity feels more devastating to me, so I wanted to share that perspective.  It’s a recurring theme in other pieces, including my next project: a sci-fi novel about a rather shady radio exec with a particular talent for traveling through time.

Since kindergarten, but not seriously until I was in my mid-thirties.  Looking back, I’m a little ashamed that I pissed away so much time.

Messily.  With lots of coffee.  I tend to write the scenes that compel me most and the essentials to convey plot and theme.  Then I put them in some kind of order, figure out what needs to happen in between so things make sense, and tie it all together.  I believe this is called the quilting method.  Sometimes I feel detached from the project until I throw myself into research, so I visit towns that inspire my settings, even live like my characters.  For instance, I hosted a radio show based on a weekly theme so I could more accurately portray my current protagonist.

After the pandemic hit and we were forced to work from home, I set up a nifty little table against my living room windows.  I’m usually there, but I love working “offsite”.  Coffee shops, parks, lobbies of theaters—it really refreshes the mind to get away from routine.  I wrote Sundown sitting on a lawn chair while balancing an iPad on a retaining wall.

It’s such fun.  It’s my outlet.  Some people draw, others make music…this is what I do for pleasure and escape and to occasionally torture real-life foes without those pesky social mores getting in the way.

I’m the slowest writer ever but I have some stuff for you to read in the meantime.

A novella and short story by my alter ego, for you grown-ups:  https://www.jenniferworrellwrites.com/behind-the-beaded-curtain

Everything, everywhere, all at once (assuming you open all the links in one go): linktr.ee/JenniferWorrell